Another jewel in the crown of Kilkenny's dining culture.

Even before the food hit the table at Butcher, the back drop of 90s cult classics on the house system set the bar for the evening.

It was just after 5pm on Saturday last, we were first in the door, shown to a table by the window and settled in for dinner.

It’s World Vegan Day on 1 November; here are the participating restaurants in Kilkenny

Butcher (restaurant website here) had opened the weekend previous, taking over the space previously occupied by Ripley’s Steakhouse. Leading the kitchen is Maria Raftery, formerly of Kernel and for many a year, Zuni.

We’re overlooking St. Kieran’s Street, shoppers heading for home while the first cocktail of the night is prepared. I’m pretty sure Return Of The Mack has just bounced into the Spice Girls. Like I said, the bar has been set.

Myself and Mrs. Ken on Food (formerly Mrs. Any Given Food, aka The Vegetarian) had been looking forward to this one for a while. Maria and Dick Minogue had been in the studio a week or two ahead of the opening to spill the details, but the visit has been a long time coming.

TL;DR – It didn’t disappoint and we’ll absolutely be back.

The menu is solid; heavy on the meat side of things but The Vegetarian approves wholeheartedly.

A half dozen or so starter options and a pair of salads kick things off before diving into The Sea (scallops, king prawns) and on to The Land. 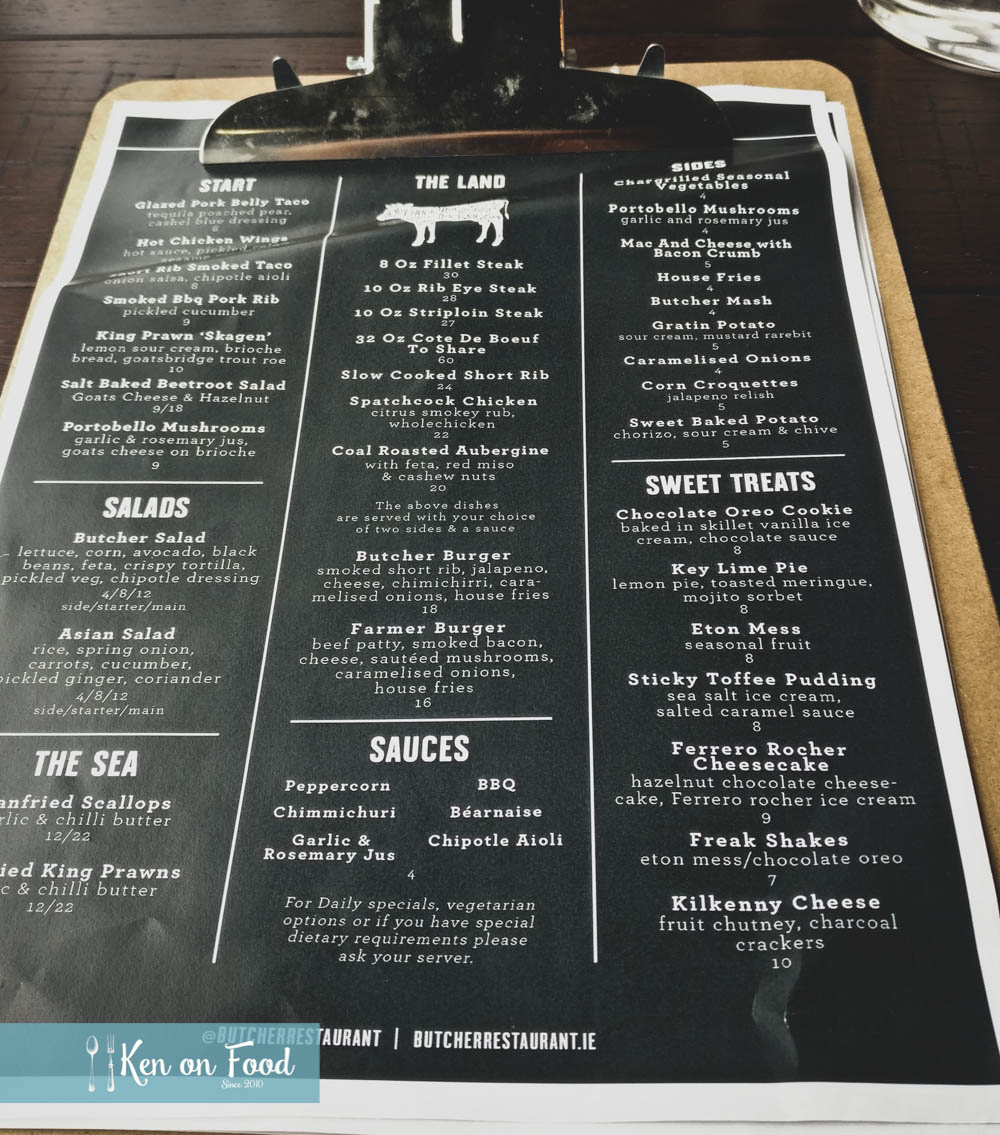 It’s here you’ll find yourself torn before the rib eye, striploin, fillet or the 32oz Cote de Boeuf made to share. Spatchcock chicken, and a pair of burgers will give meat lovers plenty of choice.

There are a number of options too on sides and a seriously tempting dessert menu, even if you think you can’t squeeze any more in.

While herself ordered some manner of a swanky cocktail bedecked in pineapple wedges, the first port of call was the starter.

For me, the glazed pork belly taco, served up with tequila poached pear and a cashel blue dressing. The fire is provided by slivers of red chili.

The salt baked beetroot salad, with goats cheese and topped with hazelnut shavings scored big poitns with The Vegetarian. Running €9 as a starter, it’s also available as a hefty main for €18. Portion sizes are on point.

Starting with The Vegetarian, the coal roasted aubergine with feta, red miso and cashew nuts. The menu description doesn’t do the dish justice though.

The whole aubergine thing can be hit and miss, but this was all hit – stacked with vegetables and made to disappear.

For me, the slow cooked short rib. When it arrives, it’s exactly how I like my meat – alone, on the plate, lightly salted.

A sliver here, a sliver there, and it falls off the bone. Some rosemary and garlic jus on the side, magic.

With those particular mains dishes, you get to pick two sides of your choosing along with a sauce.

Herself chooses the portobello mushrooms in garlic & rosemary jus along with the gratin potato. I go elsewhere and seek out the loaded sweet baked potator with chorizo, sour cream and chive along with the corn croquettes.

In fairness to Dick, we arrived with no booked and were given a table that needed to be back by 7 (or maybe half) for a booking.

By the time we were finishing up, the place was buzzing. Booked out for the night, but we reckoned there was about 20 minutes or so spare on the clock.

You know the saying “when you’re out, you’re out”? It applied here. And how.

An Americano (for her) and an espresso (for me) were chose to wrap things up. Actually, they were chosen more to accompany the sticky toffee pudding with salted caramel (for her) and the Eton mess (for me).

Even though it’s early days, Butcher is bringing a wealth of experience in the kitchen, the bar and front of house. The atmosphere is cracking, the food on point and the price (three course meal and drinks for two running under a hundred quid) is bang on.

If you’re planning on heading, particularly for the weekend, get your booking done in advance.